Another week of whale watching aboard the Legacy and another weekly wrap-up. This past week we got to hang out with some Gray Whales, a Humpback Whale, Pacific White-Sided Dolphin, Common Dolphin, and some Bottlenose Dolphin. 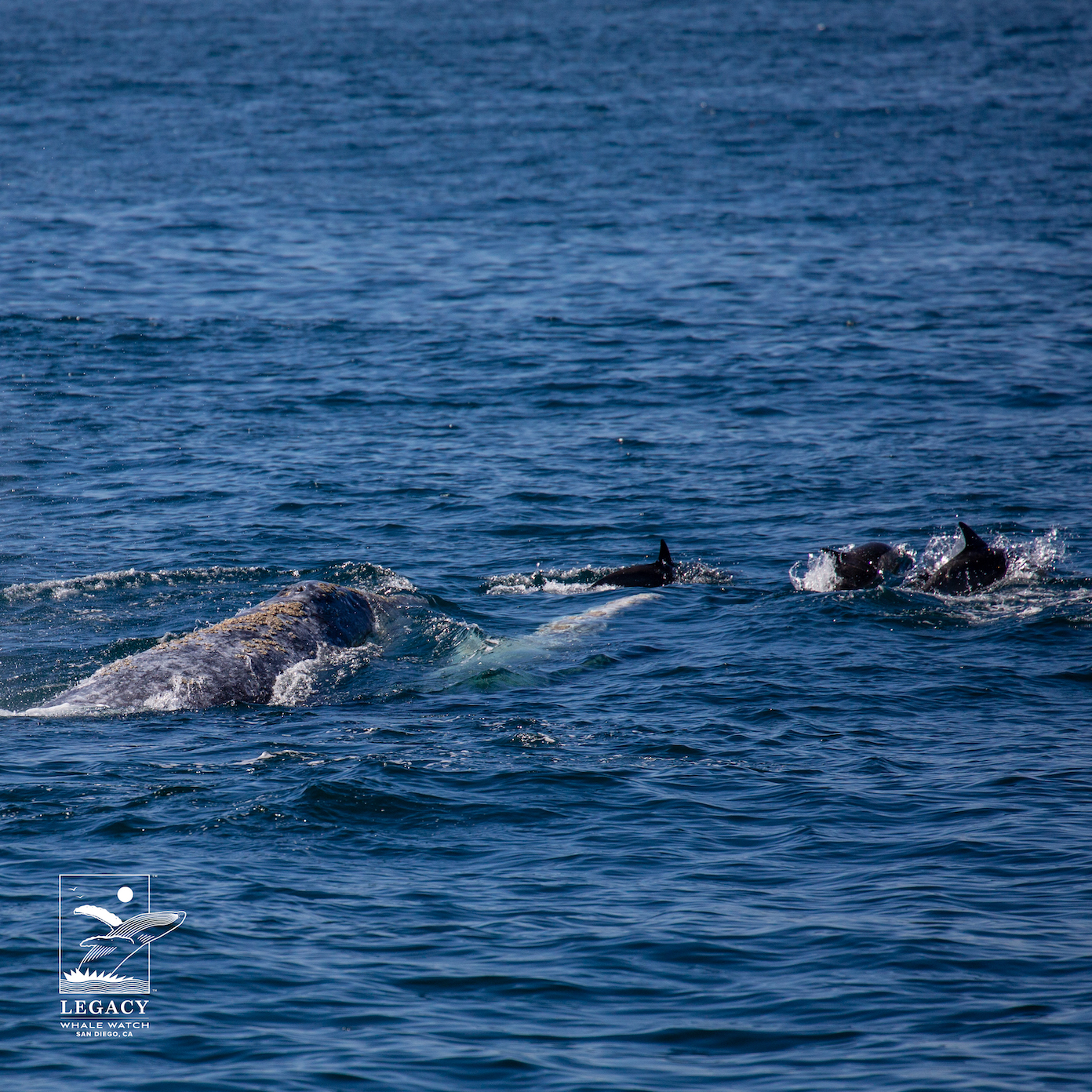 Gray Whale sightings this week have included mainly north-bound individuals. The majority of the pod has made it down to Mexico by this point in the season. We are now beginning to see Gray Whales that are getting a head start on their return migration to the Arctic Ocean around Alaska. Typically, northbound Gray Whales are moving with purpose, pretty intent on making it back to their home waters. This past week, we spotted a trio of Gray Whales that seemed more interested in playing with a pod of dolphin than reaching their final destination. These curious dolphin and whales put on quite the show! The whales were swimming hip to hip and kept surfacing right behind the dolphin, within about 10 feet. It is not uncommon for marine mammals to take interest in one another, but it was pretty amazing seeing it firsthand. One really gets a sense of the heightened intelligence of these animals, when witnessing such curiosity and play. 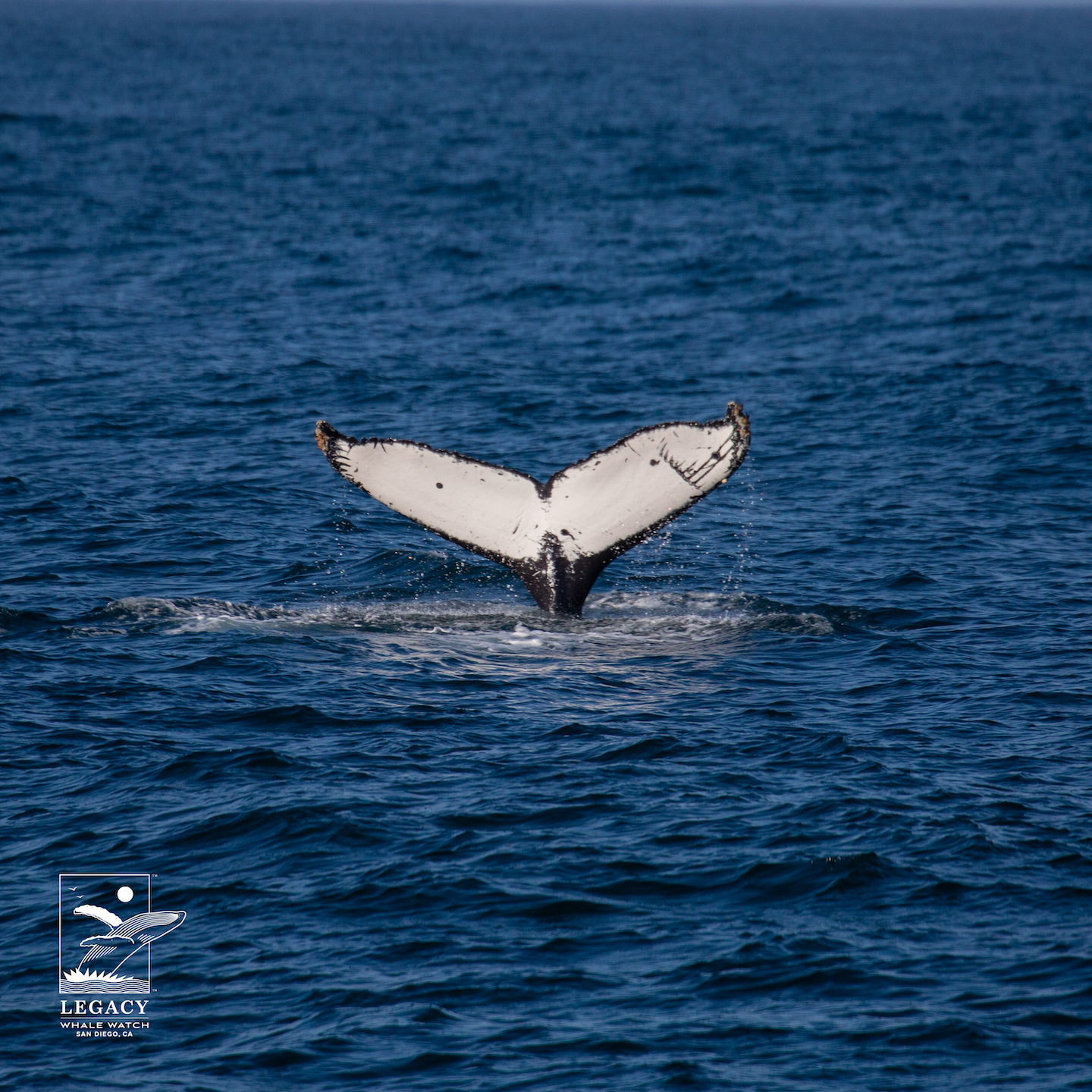 A Humpback Whale named “Swiper” showed up again this past week and we were very excited to see it hang out in San Diego waters for a couple days. This is the same individual that breached during a trip roughly 3 weeks ago. Humpback Whales have individual-unique patterns of white and black on the underside of their tails. It is similar to human’s fingerprints. Swiper is named for a scar found on the end of the right lobe of its tail. This rake mark shows that Swiper was once “swiped,” or attacked, by at least one Orca. Swiper survived and now has the scar to prove it survived a run in with one of the deadliest animals in the ocean. 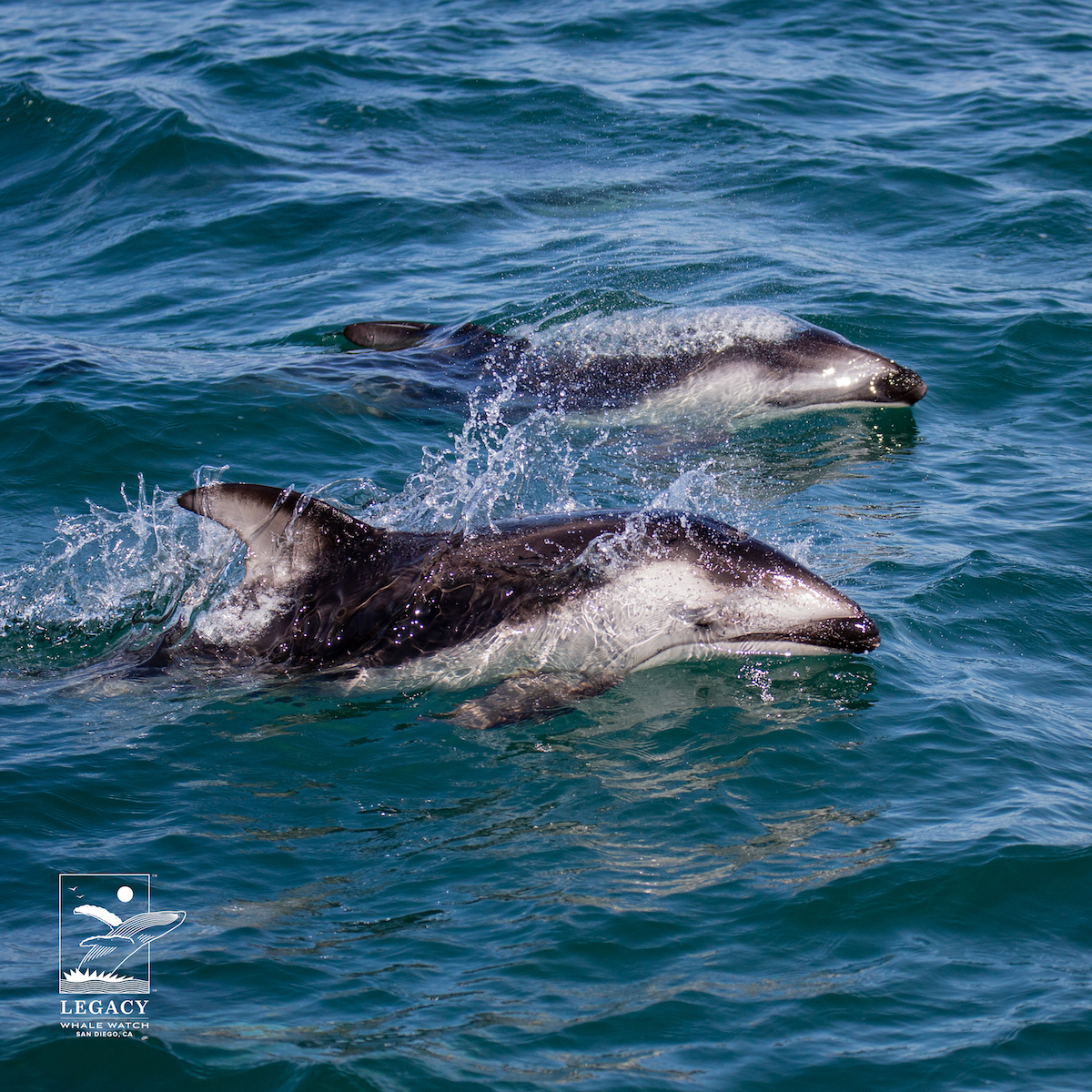 Pacific White-Sided Dolphin were spotted in relatively great number on a couple trips this past week. Typically staying in pods of 10 or less individuals, Pacific White-Sided Dolphin are a curious species, but not really as friendly as our Common Dolphin. Normal behavior from our Pacific White-Sided Dolphin includes a couple curious passes at our boat, then on to their next destination. This past week, we saw a couple pods that had over 20 individuals and were much more friendly that what we have seen the rest of the season. They hung out with our boat for a while and even got airborne a handful of times, which has been rather rare this past season. We have our fingers crossed that they stick around a little longer. 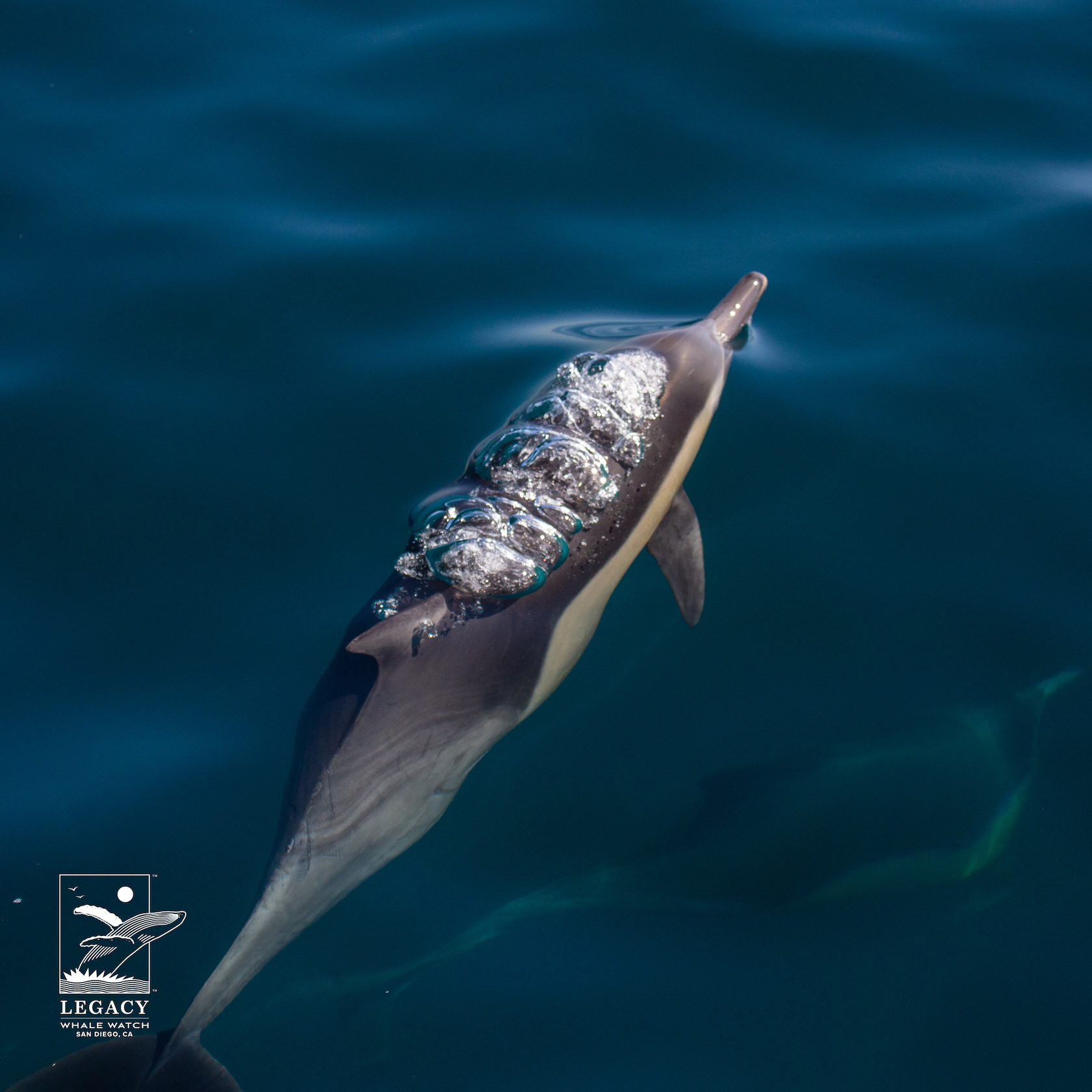 Common Dolphin have been spotted pretty consistently in recent trips. It would appear that their pods can be found just a little further offshore than where we had previously seen our Gray Whales. When going offshore, we here at the Legacy always keep one eye on the horizon to the west, looking for that telltale giant splash that is a dolphin reentering the ocean after a leap. With our northbound Gray Whales striking further out west for their return migration, there will be more and more opportunity for interactions with Common Dolphin. After seeing our Common Dolphin/Gray Whale party last week, we are hoping that this becomes a common occurrence. 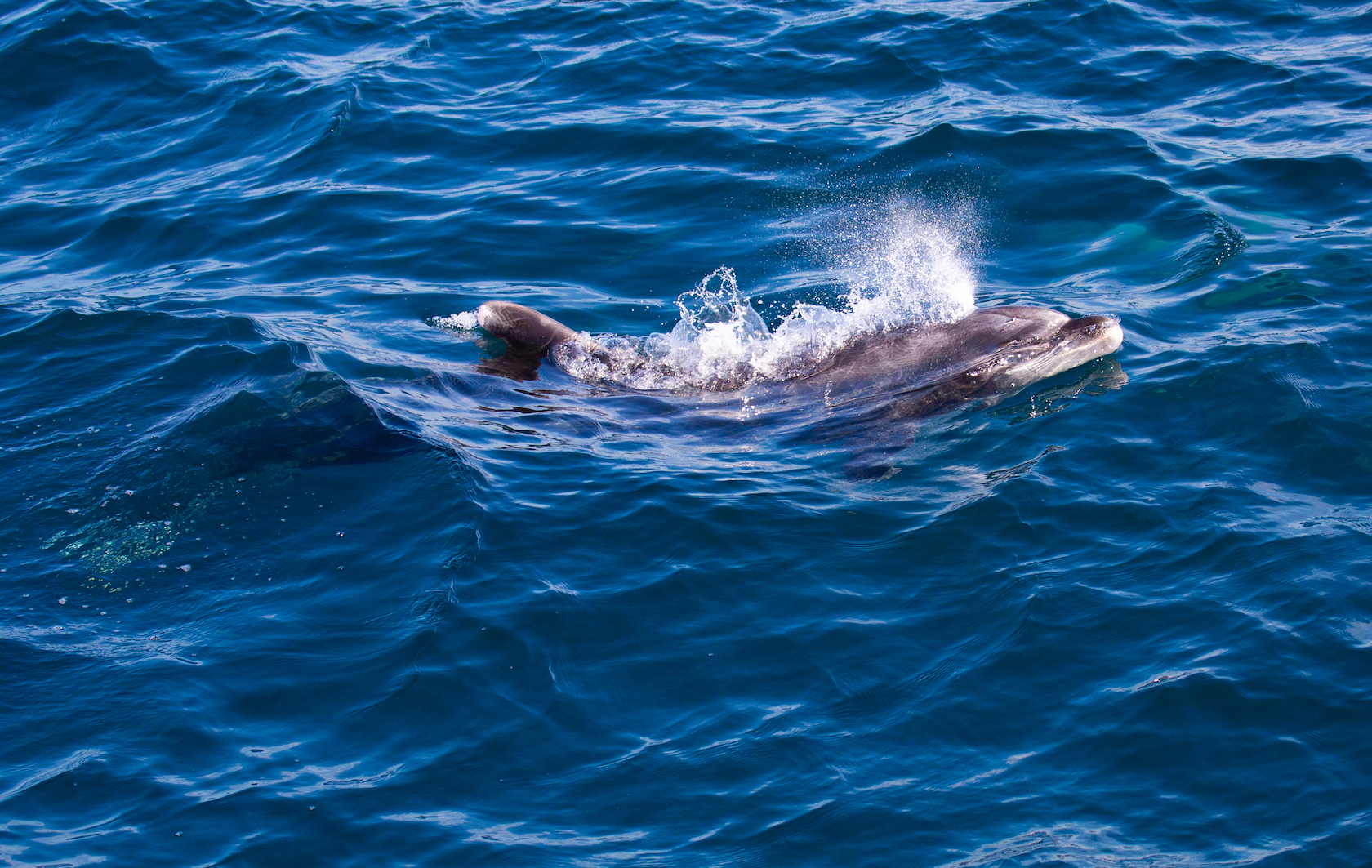 Bottlenose Dolphin spotted this past week were all “inshore” bottlenose. Sightings occurred mainly at the mouth of the Mission Bay Jetty, where this particular pod likes to hang out. Some sightings were actually pretty far into the channel itself. Always great to see, these bottlenose like to surf along under the boat for a minute, especially a vessel they recognize like the Legacy. We look forward to the upcoming months, when their offshore counterparts should be showing more frequently.

Another week of whale watching in the bag and another on the horizon. We are entering the height of Gray Whales’ northbound migration which will most likely turn offshore waters into a Gray Whale “highway” of sorts. Additionally, with the shift in seasons we are beginning to see a shift in species. Humpback Whale sightings this past week could be indicative of a great Spring to come. We are hopeful!