The past week of whale watching aboard the Legacy brought us some amazing trips. Sightings this past week included Gray Whales, Common Dolphin, and Bottlenose Dolphin. 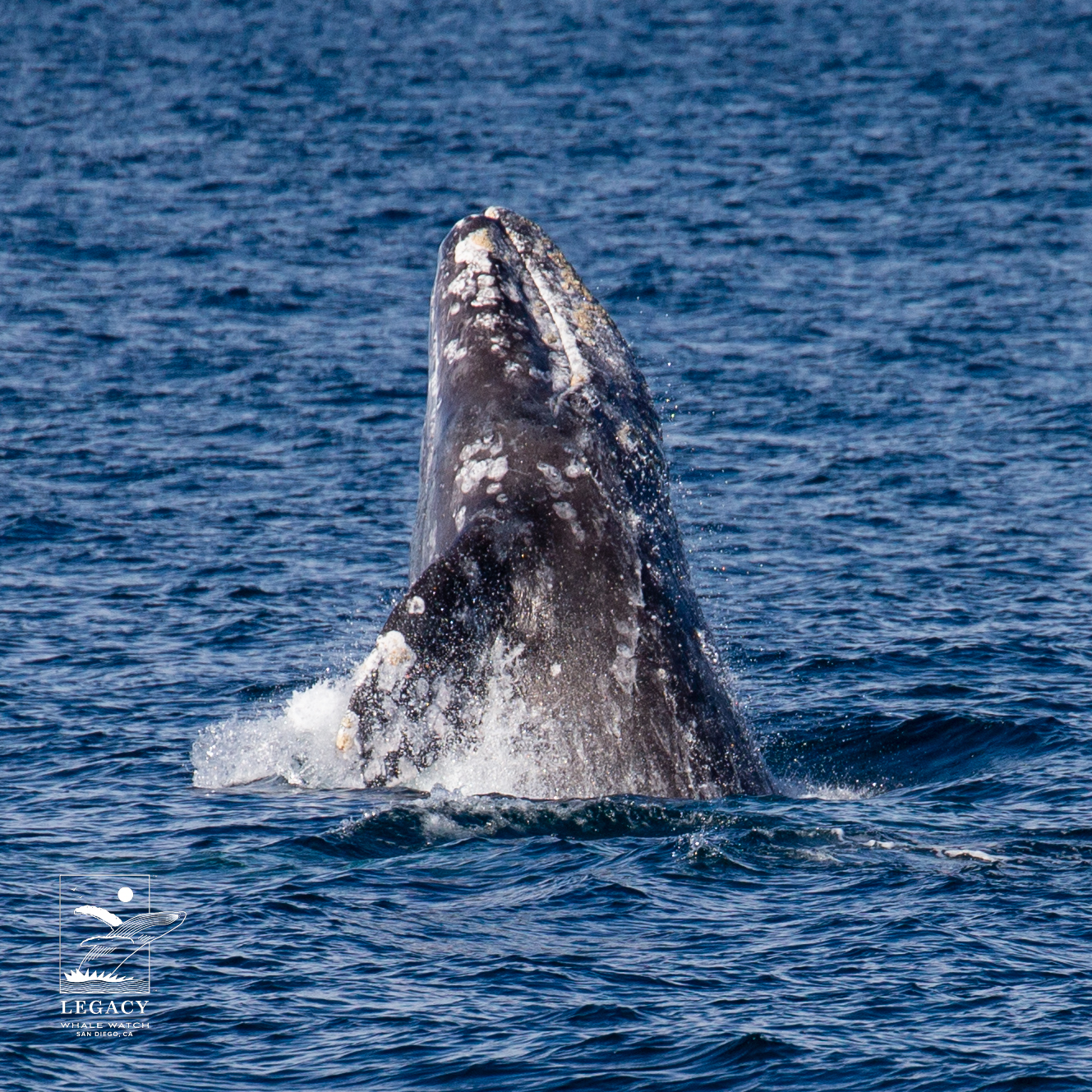 This past Friday we came upon a group of 4 Gray Whales that were making their way offshore and to the north. This group was just at the outset of their migration back to the Arctic Ocean around Alaska. Typically, these northbound Gray Whales are all business, intent on getting back to their home waters. On our approach, we noticed the whales were splashing quite a bit, and we saw some pectoral fins, indicating that these whales were rolling onto their sides, a behavior seen in more playful individuals. Then, we watched as one individual breached 11 times in a row! We arrived on the scene and after a short pause, they commenced breaching again. Scientists are still not sure why our dolphins and whales breach. The pressure of a marine mammal hitting the surface of the water is believed to remove parasites from their skin, but scientists also see whales breaching just for fun and because they can. This Gray Whale breached over 15 times in total, suggesting he/she either had a bad itch, was just playing around, or a combination of the two. The pod it was a part of had 4 individuals in it, with each Gray Whale swimming almost on top of one another. Their behavior suggests they were having a great time playing around before setting out to the north in earnest. Regardless of their reasons, the show they put one was amazing! 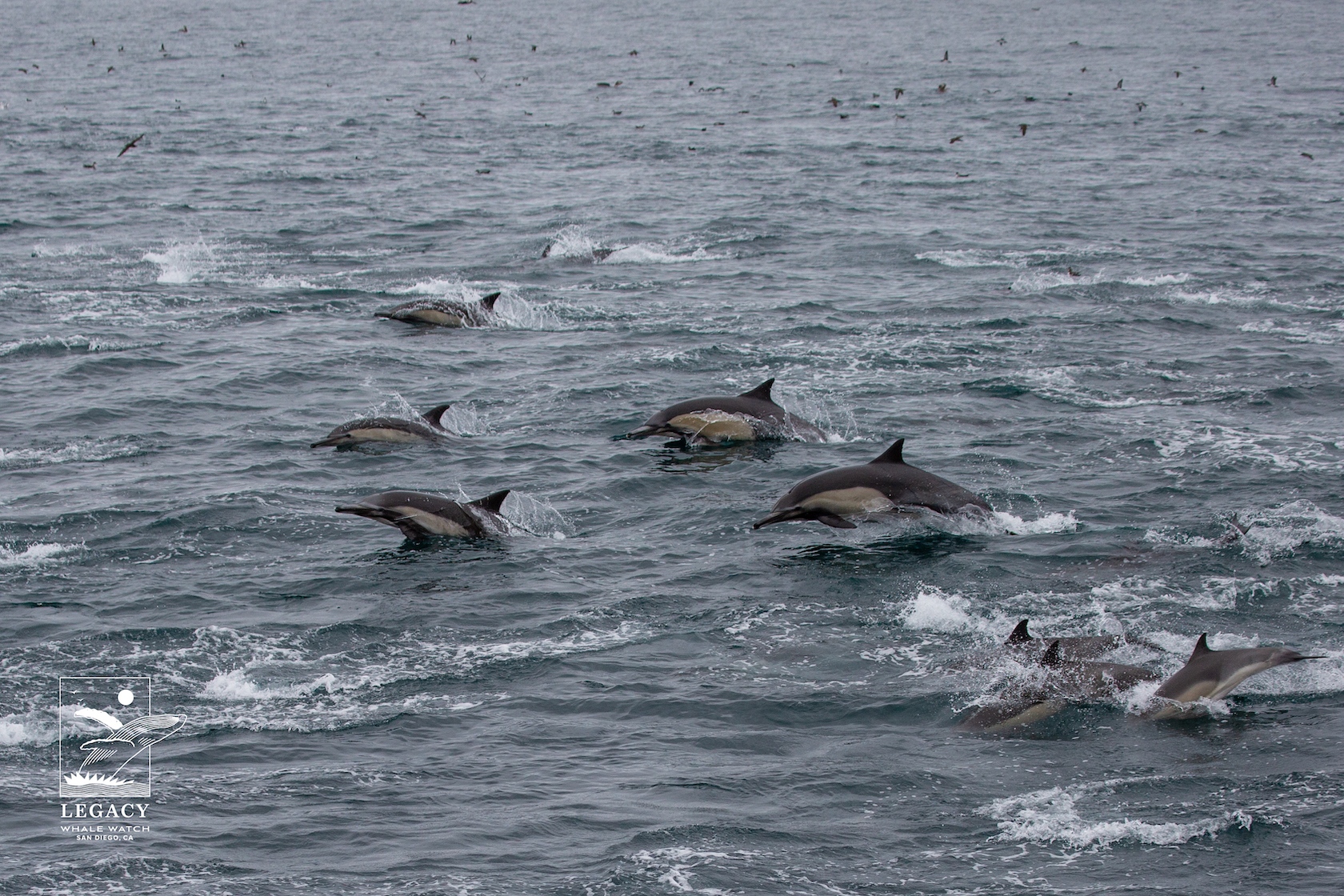 A pod of roughly 300 Common Dolphin were spotted this past week. We found them under a ton of active seabirds, which is sure sign of bait ball feeding. Bait fish, sardines/mackerel/herring/anchovies, will group into a ball when threatened by predators. Fish have the ability to sense changes in water pressure with an organ called the “lateral line.” This organ makes the bait ball a good defense, so long as you are not the fish on the outside. As the fish jostle to stay in the heart of the ball, predators will take turns trying to snag a slow fish. Common Dolphin, which are intelligent marine mammals, will use sound and bubbles to scare/confuse these bait fish, forcing them to the surface where they can pin them and feed. The birds are waiting for this exact moment, diving down from on high and attacking the bait ball from above. When feeding commences, these bait balls become spots of concentrated activity. Hundreds of dolphin break the surface, right next to each other, while the birds plummet into the fray. It is amazing to watch! 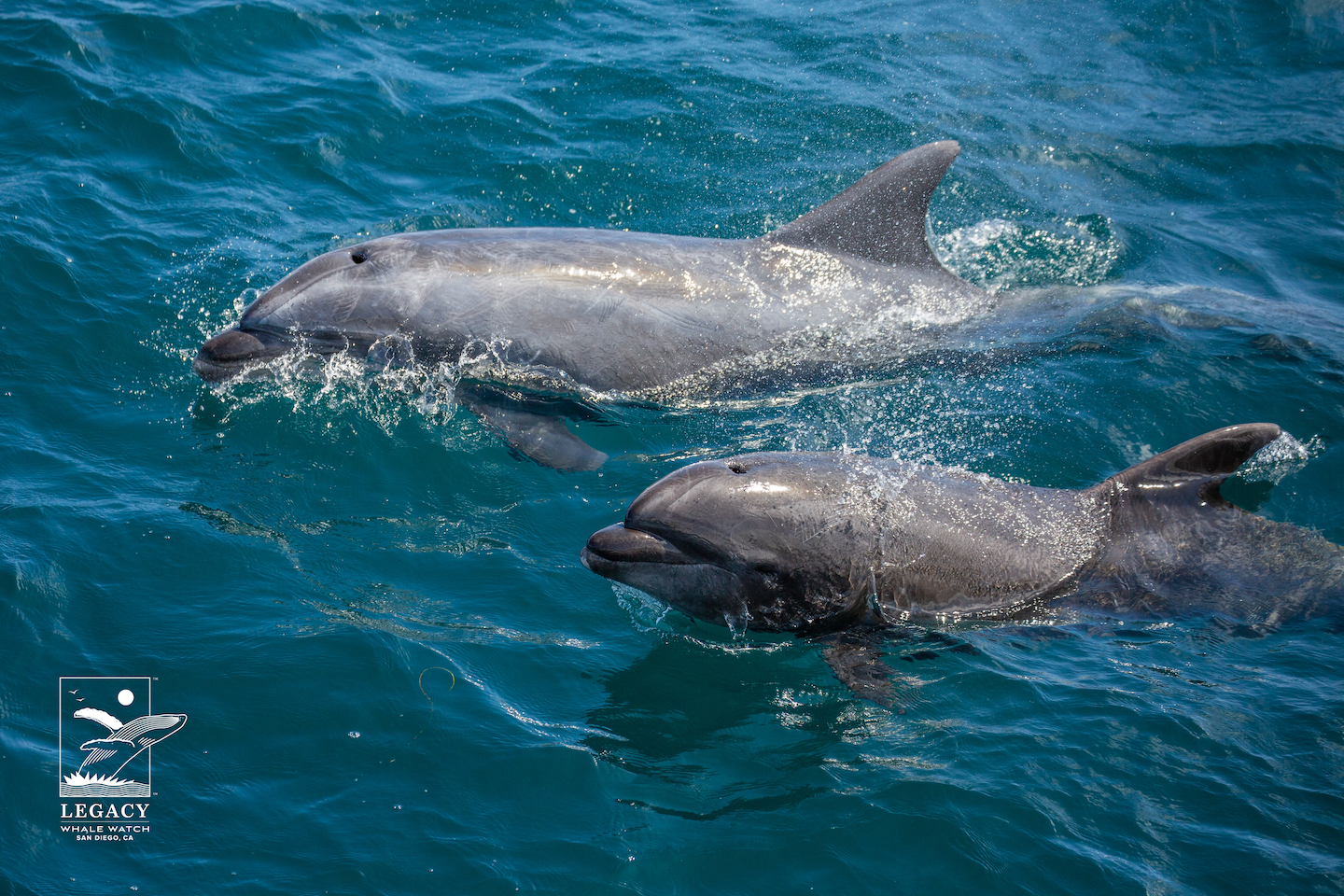 Bottlenose Dolphin were spotted far offshore this past week and we were very excited to see a return of our “offshore” bottlenose. For the past month or so, we have been seeing the inshore bottlenose variant, which tend to be a little smaller and shyer. Thus, it was nice to see these offshore bottlenose and a large pod at that. Roughly 20 individuals hung out with the boat, riding our bow and spy hoping the passengers onboard. This trip was a reminder on how big out Bottlenose can get, with a few individuals reaching close to 10 feet long. A 10 foot Bottlenose can weight up to 1000 pounds! So cool to see these extremely intelligent and friendly marine mammals.

As we enter the next week of whale watching, we hope to find more northbound Gray Whales. As trips tend more offshore this time of the season, we also hope to see some other species, like out offshore Bottlenose, that spend most of their time in deeper water. Gray Whale season continues, but we are also excited to see what other species the deep ocean will bring us!